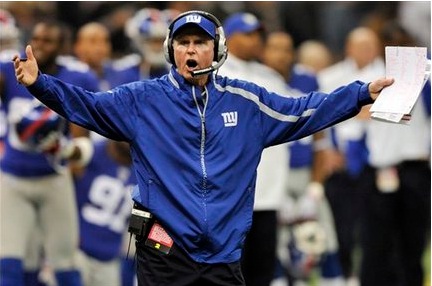 
[Full disclosure: I am a New York Giants fan.]

As a leader, sometimes it doesn’t matter whether you’re right or wrong. It just matters that you make a choice. Actually, that’s completely untrue. While decisive action can earn you the respect of your key stakeholders, New York Giants Head Coach Tom Coughlin would be the first to tell you that when leaders send the wrong message, it could spell disaster, or worse, it could mean your job.

In just a few words: “adapt or die.” Coughlin, who is about to lead his team to its second Super Bowl in five seasons has taught us that and it’s given him historic success. But there also are lessons for us as communications professionals. Let’s think of the coach as the “agency” and the players as the “clients.”

Lesson No. 1: Adjust the message if it’s not working. Post haste.

Coughlin joined the Giants in 2004. After three seasons of locker room and front office tumult brought on by his rigid leadership style, he led the franchise to the Super Bowl in 2007. Just as they will this Sunday, the Giants faced the New England Patriots. Quarterback Tom Brady was still captivating audiences on and off the field. Coach Bill Belichick was still donning hoodies and being lauded as a brilliant strategist. The communication between player (client) and coach (agency) was clear. The system worked. The Patriots won games. No one asked questions. No one was threatened with a pink slip.

Then there was Coughlin, who was being nudged out because he couldn’t communicate clearly with his players and, thusly, was losing games. Here is a leader who proved he could convey a gameplan to a squad of the toughest men in the world, but he couldn’t get them to even like him, which meant they couldn’t execute. That’s when he changed (sort of) in mid-2007. While he held firm on his approach to the game, he adjusted his master-commander dynamic with the players. Communication became a two-way street. It was interactive. One might even go as far to say that Coughlin went from traditional to digital. Either way, it translated to a Super Bowl victory that year.

In 2008, following the improbable Super Bowl victory, a former business editor at the Star Ledger wrote:

“He (Coughlin) was an autocratic tyrant with an explosive temper who was fired from his last job and came close to being canned from his current one.

But Tom Coughlin had an epiphany: The taskmaster coach, who once fined two of his players for being late for a meeting even though they had been in a car accident, loosened his management style this season and opened lines of communication with players.”

Fast forward: this season’s negativity and dissention reared their ugly heads again when it seemed the Giants only succeeded at losing when it mattered most. But this time was different. This time the leader refused to waver.

Lesson No. 2: If you’re confident that the message is sound, stay the course.

While Coughlin may’ve softened his approach before his last Super Bowl appearance, by and large he’s been the same person throughout. Yet this time his players are in his corner.

In the communication business, the client has to buy into an idea. Once we establish the message, the onus is on us to execute. It’s a two-way flow of ideas, but the foundation of that flow begins with us, just as it began with Coughlin. Get your client (players) to believe and then follow through. What proves execution more than a Super Bowl victory?