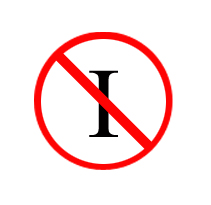 
Barb Sawyers posted a blog on Ragan.com on September 30 titled “In corporate communications, ditch the ‘we’ and make things personal.”  She went on to quote an author named James Pennebaker, whose “research” yielded the statement that “‘we’ is the voice of liars and politicians at war.”

To which I say: rubbish!  Absolute rubbish!

One of the first lessons I learned playing sports at summer camp was that “there is no I in team.”  Yes, I know that sounds hokey, but things that sound hokey are often tried and true.  Certainly, that aphorism has been for me.  Teammates, whether on a playing field or in the office, have to subjugate their personal glory for the greater good.  And good teams beat “single combat warriors” every day.

Later, when I entered the business world in 1967, working for my father’s small PR firm, one of the first things he told me was: “forget about the vertical pronoun when you’re communicating on our behalf.  We’re all in this together.”  That stint was followed by four years in the U.S. Air Force, a team-based organization if ever there was one.  The maintenance sergeant on the flight line was just as crucial to the mission as the aircraft commander.

So it can hardly have come as a surprise to anyone that, when I founded my own tiny (two person) PR firm in 1975, the guiding ethos was that “we are a ‘we’ company.  People who can’t lose the “I” need not apply.”  Over time, that firm has grown to 40 people and been named four times as one the “Best PR Firms to Work For” by the Holmes Report, and last year was named the 10th “Best Company (of any kind) to Work for in New York” by Crain’s New York Magazine.

If you ask any of our employees whether we value “We” or “I”, we have no doubt that they’ll give you the right answer.  And we are very proud of that!