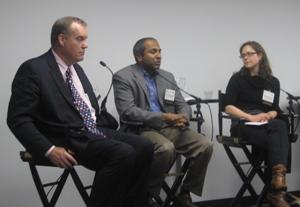 
On Tuesday night, my colleague Katherine Kilpatrick and I attended a panel on the subject of social media and financial journalism at the Wall Street Journal offices in midtown, NYC.  Hosted by the Financial Communications Society, the discussion brought together journalists and scholars to opine on the future of a reporting niche near and dear to our colleagues and clients here at BlissPR. Financial news has been slower to adapt to the new social media platforms than areas like entertainment and technology, but the proverbial ball is rolling (see The Big Money, Alphaville).

The overarching message upon which everyone agreed won’t be news to most of you: this landscape is changing, and fast. Dennis Berman of the Wall Street Journal remarked that “every day, people die – they read newspapers. Every day, people are born – they won’t.”  Paul Murphy of the Financial Times declared that the newspaper business is ill-prepared for the magnitude of change currently taking place.

Surprisingly, though, the overall sentiment of the event was positive (and not just because there was an open bar). While there are tremendous changes afoot, there’s a great deal of enthusiasm in the financial reporting community about the opportunities they present.  Sree Sreenivasan of the Columbia Graduate School of Journalism heralded the rise of the “Tradigital Journalist” – a traditional journalist with an overlay of digital knowledge and skills. The importance of specialization, among journalists and marketers alike, will be amplified as the media continues to fragment.

Stocks and investments may not seem as conducive to online community building as celebrity gossip or high-tech gadgetry, but the panelists at the FCS event believe that’s where we’re heading, and we agree. Social media is all about engagement among people who share an understanding of and an interest in common topics, including financial news.  Organizations cited as pioneers in the new media age (not necessarily on the financial beat) were The Huffington Post, Politico, DNAinfo.com and TMZ, to name a few.

Who do you think is blazing the trail for financial journalism in social media?