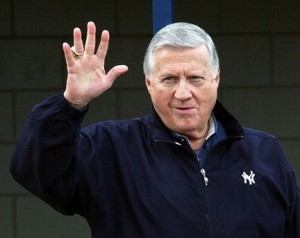 
“The evil that men do lives after them; the good is oft interred with their bones.” – Shakespeare, Julius Caesar

“There are no second acts in American Lives.”  – F. Scott Fitzgerald

I was born in 1975 and raised a Yankees fan, so George Steinbrenner made it an interesting time to grow up. I was a little young to remember the late-70s championship teams, but I have some vague memories of the 1981 World Series loss to the Dodgers. For some reason, though, they center around Goose Gossage beaming Ron Cey and a beyond awkward post-victory performance on “Solid Gold” (Of course I’ve also blocked out most of the 2001 and 2003 World Series’ too, so maybe age wasn’t the issue).

For most of my formative years then, I was raised with one core unbending truth: George Steinbrenner was a horrible person, singlehandedly destroying the New York Yankees. The evidence was there for all to see. The botched trades and signings.  The off-the-field controversies. The seemingly trivial issues that ballooned into major stories.  The overbearing behavior.  The managerial turnover.  The suspensions.  Thirteen years of controversy with not one playoff appearance.

And then things changed. The Yanks made the playoffs in 1995 and went on to win the World Series in 1996. There was an early playoff loss to Cleveland (an otherwise lovely city) in 1997, then three straight championships and a run of five World Series appearances in six seasons. The distractions were still there, but didn’t seem to matter nearly as much so long as the wins kept coming. Steinbrenner’s public image changed along with the team’s fortunes, though. He went from being reviled to receiving standing ovations from fans appreciative of his never-ending desire to win – and willingness to pay up to do so.

Over the past few years, fans had seen Steinbrenner take less of a public role as the head of the Yankees before finally handing over official control to sons Hal and Hank. And then the news came last week: After 37 years as the principal owner of the New York Yankees, George Steinbrenner had passed away at 80 years of age.

As a PR professional, I cringe when I think about the public persona that Steinbrenner allowed the media to portray early on: the fiery, win-at-all-costs team owner that cared little for the feelings and well-being of anyone that didn’t get on board with his program. Looking back though, maybe this was intentional on George’s part, creating the image he thought fans wanted to see attached to the most successful franchise in Major League Baseball.

Because after he was gone, the stories started to come:

“George paid for my surgery.”

“He paid for my son’s college tuition.”

“He taught me how his own mistakes had shown him the value of a second chance.”

My own Steinbrenner story: I was in an elevator at Yankees Stadium in August of 1994 – the last game before the strike would end the season, robbing the Yankees of their best shot at a World Series in over a decade. I turned to see “The Boss” and his entourage in the elevator with us. My now husband said, in a low voice, “Raise your hand if you’re famous.”

The man I had grown up to view as a fire-breathing tyrant – during what was probably among the more stressful nights of his career – didn’t say a word, but gamely raised his hand.

I’m stricken again by the art of image management. This was a man that was for years known as a cold, demanding team owner. There was no question that George himself had encouraged this view. There have been incidents along the way that are still difficult to excuse for their boorishness. At the same time, though, it appears that there have been countless acts of philanthropy with an impact that really matters – far more so than the results of a baseball game.

If he had chosen, it now seems that we all could have had a different picture of George Steinbrenner and his core values over the years. Whether it was driven by his view of what the business required, or mere modesty, he kept that view hidden until he was gone.