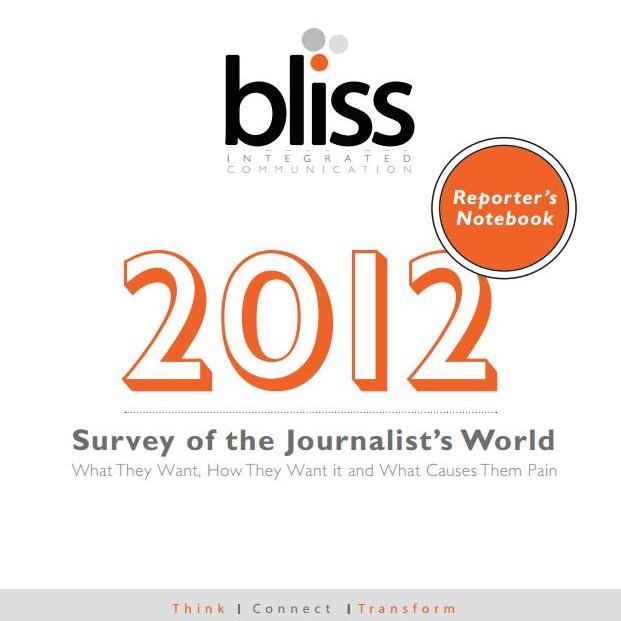 Survey of the Journalist’s World: What They Want, How They Want It, and What Causes Them Pain


Ever wonder what’s on the mind of the media?  As the rise of the citizen journalist and the age of editorial marketing collides with the Fourth Estate, what does a reporter need today to be successful in an information-intensive world?

To answer these questions, and others, Bliss Integrated Communication, with the help of market research firm Market Measurement, conducted a survey of 100 journalists nationwide, across all media channels—print, digital, broadcast—and personally interviewed another 25 more. We aimed to get at the heart of how journalists think about their job, whether public relations firms hurt or hinder their work when time is of essence, what is missing from media pitches, and what their feelings are on the future of journalism as a whole.

As sources of information continue  to expand and as distribution channels become more vast and varied, journalists find themselves vying for the reader’s and viewer’s attention. This is one of the top challenges facing journalists according to the 2012 Survey of the Journalist’s World: What They Want, How They Want It, and What Causes Them Pain.

There is often a perceived disconnect between public relations agencies and their ability to not only align marketing goals with strategic business objectives but also to garner media hits that translate into significant business results.  With our finger on the pulse of what news-gatherers think and need to do their job effectively, we are better positioned to help our clients become thought leaders in their markets.