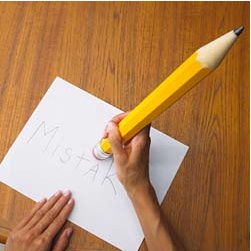 It’s All About the Audience, Stupid!


I wish there was a more effective way of learning than by making mistakes, but at least mistakes have the virtue of sounding the alarm when you’re about to make them again.

The work went down to the wire, as is often the case, and we wound up sitting in his suburban Connecticut office at 10 pm in the middle of thunderstorm trying to finish up.  I finished writing several paragraphs on another arcane (to me) aspect of the bank’s work, pulled it out of the typewriter (yes, typewriter), handed it to Ken, and said: “What do you think?”

He read it quickly, harrumphed, and then said: “John, I think it’s wonderful that you figured out how Fixed Income Sales & Trading works, but the CFOs reading this brochure already know that.  They want to know why they should work with A.G. Becker and you haven’t told them that.”

Thus was the Ken Kline Proviso born, to wit: “it is OK to dumb down a subject so that you can understand it – in fact, it is often absolutely necessary – but don’t let the dumbing down leak into your prose because you are not the audience.  Remember who is.”

The Proviso held me in good stead some years later while writing a video script to be used at a huge plastics trade show by our client, a manufacturer of scientific test instrumentation.  The idea was that a character playing Isaac Newton would discuss the instruments in a humorous manner, while pointing out the importance of measuring both viscosity and elasticity in plastics.

Now I am by no means a scientist and most of these concepts and language were Greek to me, but the VP-Marketing was a great instructor and we completed the “dumbing down for John” pretty quickly.  That gave me enough time to write a script that had humor but talked in the language of the senior engineers in the trade show audience.  Thus did I avoid having a Viscosity Proviso as well.

What mistakes have you learned from?  Did you name any of them?