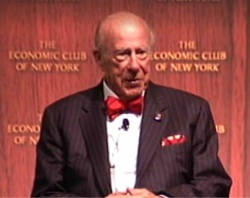 Communicating Effectively: Simple but Not Easy


When The Honorable George P. Schultz, a Distinguished Fellow at the Hoover Institution, Stanford University and Former U.S. Secretary of State accepted the First Award for Leadership Excellence by The Economic Club of New York last month, I was struck by the simplicity of his message:   “I want to tell you what I think should be done to get our economy back on track.” http://econclubny.com/

No doubt the Club members all felt there was something to learn from this esteemed academic, economist and longtime policymaker.  In framing his comments, Mr. Schultz stated what we all know to be true—and that is the United States is “leading from behind…You can’t lead if your economy is in the doldrums as ours is.”

But before Mr. Schultz shared his prescription to heal the economy, he spoke of the underlying seismic shifts taking place in the world today. In a nutshell, Mr. Schultz identified three reasons for this tremendous change: demography; the information and communications revolution; and evolution in the state system.

First, we have a rapidly aging population and a declining labor pool in certain parts of the world. Second, when you consider the ability for individuals around the world to find any information they want whenever they want, it changes the problem of governance and increases the emergence of violence. Finally, consider the large parts of the world that are basically ungoverned or “areas that have a sense of government but no genuine sovereign capacity to do anything.” Mr. Schultz asks “…are we going to diminish our sovereignty even further by some sort of fiscal union? Or are we going to go back to more national identities?”

So what does Mr. Schultz recommend?

1) Tax reform. “Clean out the preferences, lower the marginal tax rate and…do the same thing with the corporate rate,” he says.

2) Reduce spending.  “Let somebody calculate what the revenues would be from this tax system if the economy were operating at a good level. That should be your aiming point.” Schultz argues that we should focus on the spending for today, not ten years from now. “Get the line going down.”

3) Cure Social Security. Do that by changing from wage indexing to price indexing.  He suggests the government “stop playing around with the payroll tax which is the way you finance the thing.” He also recommends finding a way to keep people in the workforce longer.

4) Cure healthcare. Schultz doesn’t like the healthcare law and hopes something can be done about it. Meanwhile, he urges transparency of Medicare records in a way that doesn’t intrude on privacy but rather identifies what is happening to prices and outcomes with different doctors and hospitals. He also recommends allowing people to buy insurance across state lines.

5) Monetary policy. The monetary policy is contributing to the uncertainty. “I’d like to hear an explanation of how the Fed is going to unwind this gigantic balance she they’ve got,” he says.

So what does this all have to do with media, marketing and communications? As a professionally-trained communicator, I now train others to identify their message, capture their story, and effectively communicate it with impact. To be sure, many of us have gone to these types of gatherings only to roll our eyes at the keynote speaker and wonder what it is he or she is trying to tell us.

As I listened to Mr. Schultz, I thought about how well he communicated—he had a clear concise message and point of view, backed it up with his knowledge and expertise, and then gave news-you-can use, or a prescription for change. It was a pleasure it was to hear him speak.  My point is this—communicating and speaking effectively is simple, but not easy. But Mr. Schultz at 90-years-old certainly has got it down.

To connect with Toddi: