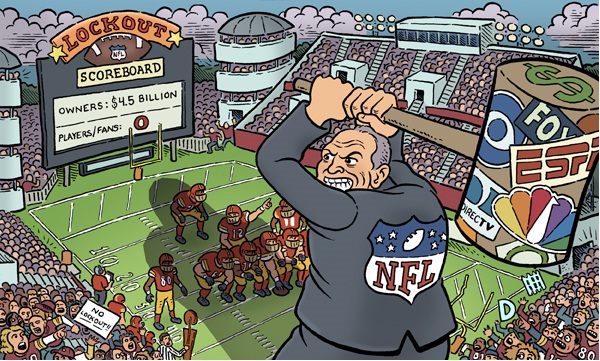 Billionaires vs. Millionaires: Effects of the NFL Lockout on the B2B industry


On Friday, my colleague Peter MacKellar was bragging about landing tickets to the Patriots-Broncos game in December. His celebration was halted by the realization that we still don’t know the status of the NFL season. The players and owners have been in mediation for almost a week and the hearings remain confidential. As an avid Redskins fan, I’m joining my fellow NFL fans in wondering when this will all be over.

Retail – Most retailers are still recovering from low sales throughout the last few years – for local retailers, football season can often act as a temporary revival in sales. As a recent Sportz Timez article reported, NFL retail sales from 2009 to 2010 declined $400 million. In addition, retail companies could face licensing issues on all official NFL gear. The question then becomes – Can they shift their marketing strategy to accommodate for lost sales? What will be the overall impact on the economy?

Hospitality – Hotel groups and restaurants are watching closely as the season creeps closer. Nearby hotels risk losing thousands of reservations and restaurants may have lower-than-expected sales, causing the local economy to suffer during what is usually one of the most profitable times of the year for local hospitality services. According to a recent article that ran in The Dallas Morning News, Cowboys games account for approximately 5,000 hotel room nights per game; A significant loss for a city that has 5,500 total hotel rooms.

Broadcast Media – Each year the major TV networks pay the NFL to broadcast their games that the networks then compensate for by selling TV advertising. Without football, how will the networks fill the time slot? Moreover, a Crain’s New York article reported that during the 2010 season, advertisers spent a total of $3.4 billion on NFL games, according to estimates by Nomura Research and Kantar Media. The NFL Players Association says advertising is approaching $4.5 billion for 2011, but without the season’s anticipated audience, some major advertisers may have to settle for less ROI. On the other hand, this could establish a greater need for media relations on companies that depend heavily on advertising ROI.

If the lockout continues, we will all miss Sunday football. What will be some of the other impacts on the B2B industry?