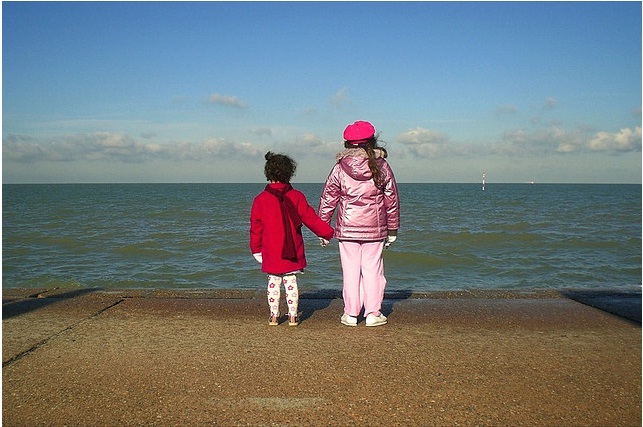 
My sister Jeanie is probably my best friend in the world. But growing up, it would have been impossible to predict that.

Jeanie was a charming tomboy who could play a mean game of lacrosse or sing a gorgeous solo in the school concert. I was a mouthy bookworm destined to become President of the Drama Club.  And yet, the older we get, the more we have in common. We spent our last vacation together, juggling kids, recreating Mario Battali’s lasagna and watching Jane Austen movies.

The Public Relations and Advertising sectors have a similar relationship. We’re sisters in the Marketing Services “family,” but we spend most of our time trying to vigorously protect our identity, territories and, most importantly, our budgets.

In my recent speech to the Transworld Advertising Agency Network (TAAN), I was asked to study and explore the differences in how PR executives and their advertising counterparts are pursuing social media business opportunities.  I found that the professions rarely see eye-to-eye, but both groups agree that PR is using social media more effectively.

That was just one headline from my joint study, which was sponsored by the Worldcom Public Relations Group (Worldcom), the largest partnership of independent PR firms in the world, and TAAN, a blue chip organization of ad agencies.  Survey respondents were the principals of 25 firms in each agency network.  Among the key findings:

Fully 84% of PR respondents were pleased with their profession’s approach to social media campaigns, with 20% saying it was an “innovative marketing communications leader” and another 64% saying it was “keeping pace.”  By contrast, only 52% of the advertising respondents rated their profession either “innovative” (12%) or “keeping pace” (40%).  Moreover, another 40% said the advertising industry was “falling behind.”

Ad executives seem more comfortable working with their PR counterparts generally and in the social media realm.   Asked to characterize their relationship with PR firms or PR departments, 40% said it was “seamless on an ongoing basis” and another 24% said it was “fruitful on a project basis.”  On the other hand, only 24% of the PR respondents felt their relationship with ad agencies was “seamless” the same number who said it was “fruitful.”

When the same question was asked specifically about working with sister agencies in social media, the disparity widened.  Fully 64% of the ad agencies felt the relationship was either “seamless” (32%) or “fruitful” (32%).  Only 8% of the PR firms felt their relationship with ad agencies was “seamless” and another 28% found it “fruitful.”

Both marketing disciplines expect fees from social media work to grow in 2011.  Asked to estimate their 2010 social media fees and to forecast fees from that source in 2011, they responded as follows:

My friend Virginia Sheridan, President of M. Silver Public Relations and Chair of the Board of Directors of Worldcom’s Americas Region, points out the real opportunity.  “First, both advertising agencies and PR firms foresee sustained growth in social media.  Second, it seems clear that such growth could be substantially enhanced by our professions working more closely together to capitalize on each others’ strengths.”

But collaboration with the frenemy was not seen as a way to move forward.  Instead, when asked how their agencies planned to capitalize on the social media “boom,” the advertising and digital PR agencies  cited the need to “integrate” social media in all marketing communications campaign and program planning (32%), “invest” in new people or training to get their organizations up to speed (16%) and to “educate” their clients about the potential of social media (8%).

I think advertising and digital PR folks have a tremendous opportunity to collaborate and win more business together. We started to brainstorm ideas in last week’s Hashtag Social Media chat.  Do you agree? How would you start?

In my post tomorrow, I’ll propose a collaborative model that I hope even two battling teenage sisters could learn to love.